From the creators of contests in Instagram comes…Twitter contests! 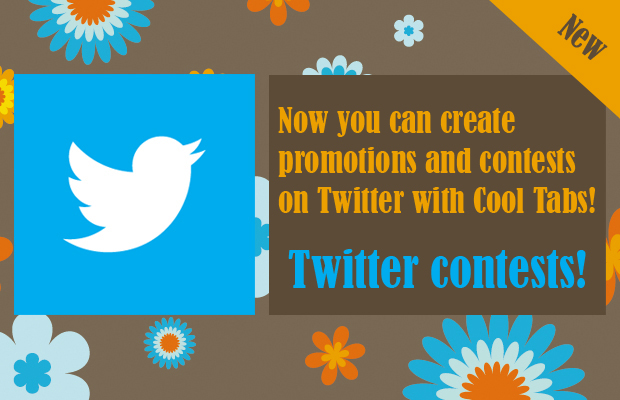 We are out of our minds! We only launched our new feature to create promotions in Instagram, a few days ago. We all welcomed and celebrated the achievement, we had good reasons to do so. However, we then went all back to our computer screens and thought we needed to take this to the next level. So we all looked at each other and decided to get down to business so as to craft a new novelty while simultaneously looking sideways and solemnly staring at our newly created integration with Instagram. After days of hard work, we are glad to announce the second greatest hit of the year,… Twitter competitions! You’ve probably seen other kinds of promos on Twitter, but Cool Promo is one of the few applications respecting participants’ data protection rights, since any users willing to participate must accept the contest’s legal terms when filling in the participation form. This means that you can then have access to participants’ details, such us their names and email addresses.

Now we have broaden our experience in applications to be used with Facebook only, we would like to use what we’ve learned from THE Social Network in Twitter. It hasn’t been easy, since both sites are very different in the way interaction occurs. But we’ve done our best to achieve our number one objetive, which is obviously to create networking, and not spam.

Twitter is a networking service which demands a more direct and effective content. The 140-character limit puts users’ creativity to the test, making slogans become critical because, as the saying goes, ‘brevity is the soul of wit‘. Twitter is therefore, as much of a challenge for us as it is for you guys… I’m afraid there is no going back: We challenge you to come up with original promos in Twitter!

What has Cool Promo got to offer on Twitter?

Cool Promo features a contest format where participants take part in contests by twitting stuff. What sort of stuff? That’s something you need to think about: How to make the most of the one tweet posted per participant. A common thing to do is obviously to add a hashtag and mention the brand. However, anything beyond that will need to be decided on by yourselves. Creating the promotion is dead simple. The most important thing you need to do is to make the most of your 140-characters text. Remember that tweets don’t necessarily need to be words, you can also ask participants to share videos or pictures, don’t forget it!

With this new option, as it was the case with Instagram competitions, you can decide whether or not to create your promotion in or outside of Facebook. What does installing TweetPromo in or out of Facebook imply?

So, are you ready to take on the challenge from this new? It’s a tough challenge, we know. But if you get it right, you can come up with very funny contests where users use very few words to share experiences, likes, opinions, critiques, etc. The fact that there is a limit on the number of words can be very positive, don’t miss this opportunity!

Here you have a tutorial to create your first Twitter contest, but we’re sure you won’t need it

Do you want to see what it would look like? Here is the example we’ve created: Twitter Promo Example. We hope your Twitter contest is very successful.